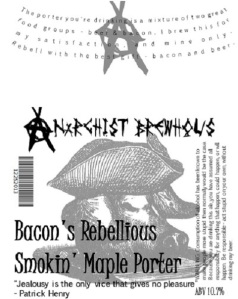 I opened a bottle of  my fifth test batch of this smoked porter the other day. For whatever reason, it turned out fairly close to what I was looking for.  It is finally coming around to what I envisioned. What could be better than bacon and beer?

My four previous test batches were a smoked porter concoction that was either too bitter or two sweet. The first two batches had a little  Peat smoked malt in them. Not bad if you wanted a good stout, but not exactly what I was looking for. Someone suggested using Cherry smoked malt and the remaining tests had a better taste. Next to be altered was the amount of maple syrup. For my one-gallon test batches, I began with 20 ml and increased up to 51 ml. The last batch was 40 ml. After adding the LME to the equation, I might have to adjust it down a little bit.

I received 3.3 lbs of Porter LME as a Christmas gift, and couldn’t imagine how I was ever going to put it to use. Shazam!  What better way to increase ABV than to add some liquid malt extract? So in went 40 oz as a late extract addition. By doing that, my SRM went to almost 64 and my gravity increased by 40. A little out of the Porter style, but would still be good for either 22b or 23 in the BJCP.  Hopefully, the next gallon will be the exactly what I am looking for. Oh, and the best part – bacon!!! I finally got the taste to come through loud and clear. Looks like I’ll be using about a pound of hickory smoked bacon for 5 gallons.

Nathanial Bacon lead a group of frontiersmen in 1676 against the ruling Governor William Berkeley and British forces in what became the first rebellion of the colonies. I could have went with a play on a movie star’s name, but for whatever reason, anarchy and Kevin Bacon don’t go together. Anyway, the pig’s head represents the bacon part of the smoked porter. A tricorn hat adorning the head is simply not historically accurate, however, most people would not recognize the head dress of the 17th century as relating to a rebellion (something closer to the Three Musketeers, maybe). Further, Nathaniel Bacon was not captured, nor was his head served on a platter. However, dying of dysentery would hardly convey a rebellious person. Finally, an anarchist’s quote that I felt summed up the drink.