It has been almost a month and I am still numb from my loss. My beer drinking companion died on May 9, 2014 – many years before she should have. As dogs go, she was the best. Intelligent, loyal, and spoiled, we wondered whether she would live past the age of two. Not that her medical problems were going to end her life at the age of two, but rather, her obstinate behavior called into question whether we would give her away. Then something happened – she settled down and became a wonderful companion.

Maggie developed several habits that stayed with her until her last breath. She loved Dunkin Donuts plain donuts. If I walked through the door with a DD bag in my hand, she would run and jump on the couch and anxiously wait for her treat. Left to her own devices, she would inhale a whole donut without taking a breath. To prevent her from choking, we would break the donut up to manageable sizes and feed her.

Her second habit – she loved beer. She would not drink just any beer, though. Her beer had to be good beer, worthy of my glass. It got to the point that when I reclined with a beer in my glass, she would sit on the edge of the recliner and stare at the glass waiting for the last few drops to be given to her. She never drank a lot of beer – just the last drops that lingered in the glass. Her best act of bravery occurred a couple of months ago. Sitting next to me on the couch, I was holding a glass in my hand and she was sitting staring at it with great anticipation. Next thing I know, her mouth dives into my glass trying to drink up as much porter as she could before I yanked it away. Although we were shocked, we laughed at her obsessive behavior. She even had her own chalice   that I would pour the last few drops into.

So it is, the best friends are taken away all to soon. I knew she was not feeling well the day we took her to the vets. She wouldn’t drink any Oberon that I poured into the palm of my hand. I knew she was all but gone. It is with much regret that she did not live longer. I sorely miss sharing my homebrew with her. Maggie probably developed her taste for quality beer from my lead. She too was a beer snob. 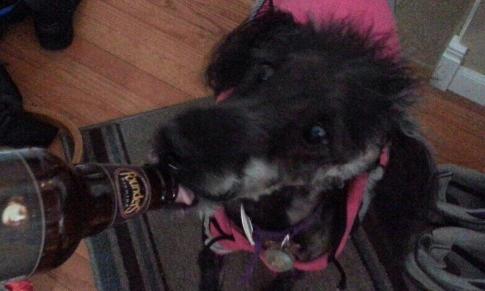 Maggie and her favorite type of beverage – a porter.