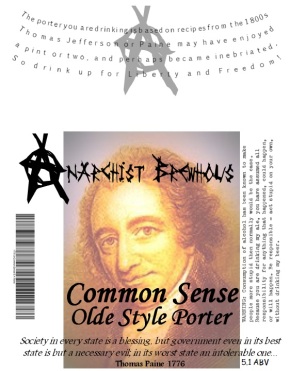 Brewed using the traditional percentages of grains found in English porters commonly consumed in the 1700’s, I attempted to remain true to the style. Unfortunately, given the modern grains and controlled yeast production, we really have no idea what it would taste like (unless you’ve gone to great extent to grow your own grain). This was a three-gallon test batch, BIAB.

Thomas Paine was an instigator, both in America and in his homeland of Great Britain.  His writings were, for the most part, meant to provoke one into action. Whether Common Sense, Rights of Man, or The Age of Reason, Paine’s ideas put the common citizen in charge of their own destiny through common sense. Today, many political philosophies look to Paine – anarchists included. Although he gave in to the idea of government, other writings suggest he would have done without it if he had his way.

This old style English robust porter turned out with a higher OG then I anticipated. Shooting for 1.056, something went wrong. I’m looking for reasons – I’m sure after a few beers I should be able to figure it out. Being off by one or two points is one thing, however a 1.073 starting gravity shows something was amiss. After secondary fermentation, rather than 1.024, apparent attenuation was much greater. My final reading before bottling was 1.010, giving me AA of 86.30%. Thus my 5.1 ABV is no longer a good number, as it is somewhere around 8.3%.

Still, all is well. The great part of homebrewing is the finished product: if it tastes great, it is a good beer!